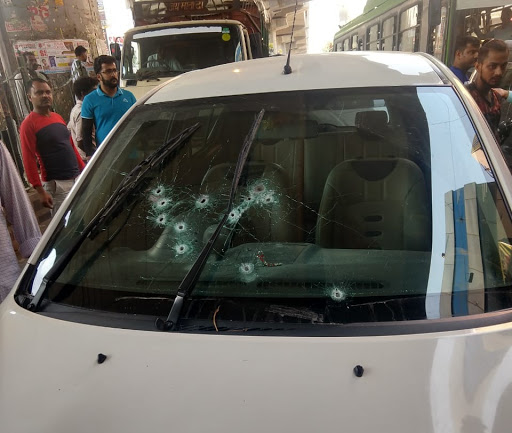 Establishing supermacy over each other usually leads to pitching battles between two groups, it's been seen on Delhi turf in the recent past. Gangwars like the one in north east district, Mitron Gaon, Dichaun gaon, south west and outer district on the periphery of Najafgarh, Delhi have hit the headlines for all the bloody cause and gory saga.
In West Delhi's Bindapur, two groups in broad daylight had a head-on clash, the police timley intervened, but the gangsters did not even hesitate to opene fire on the police. The police had to retaliate in the same coin which resulted in killing one criminal on the spot and leaving the other wounded. There were some who managed to flee the crime scene. As per the sources, one car was chasing another and the firing between two was going on. One PCR (Police Control Room) van happened to be passing by when noticed they tried stopping them by chasing some distance. In this heat, the criminals even opened fire upon the police, the cops returned the fire, in the exchange of fire one criminal identified as Vikas Dalal was killed and the other got badly injured (Parveen Gehlot) and was rushed to a nearby hospital.
Praveen Gehlot is a member of the infamous Manjeet Mahal gang whereas Vikas Dalal was associated with Manjeet Mahal gang once before joining Pradeep Solanki, both Mahal and Solanki are lodged in jail. They are sworn enemies and this firing is a fallout of their rivalry. In this shoot-out, Vikas Dalal and his gang started firing at Parveen whereas Naresh constable of Delhi Police swung into action with a view to stopping it, he shot dead Vikas Dalal. The criminals left the bike on the spot. The local police rushed to the spot and impounded the Maruti Ritz car of Parveen and the bike used by the accomplice of the slain Vikas Dalal.