Delhi Mahila Congress President Ms. Sharmistha Mukherjee has
slammed Bharatiya Janata Party today on its reported attempts to enlist support of Gopal Kanda,
the prime accused in Gitika Sharma murder case. In a letter addressing all the seven Members of
Parliament representing Delhi in Lok Sabha, all of whom are from BJP, Ms. Mukherjee
reminded them of the protest held by senior BJP leaders in Delhi on 12th August 2012 in which
they demanded arrest of Gopal Kanda. Ms. Mukherjee said that it is height of hypocrisy and
insensitivity of part of BJP leadership to seek support from the same Gopal Kanda. Ms.
Mukherjee said that it shows that lust for power could make BJP go to any length of moral
depravity.
In her letter, Ms. Mukherjee said that The people of Haryana did not give a clear mandate to the
BJP and media reports widely indicate that the prime accused in the infamous 'Gitika Sharma
Murder Case', Gopal Kanda would be supporting it to form the Government. She reminded the
hon'ble members of parliament that Gopal Kanda is the same man who was forced to surrender
to the police after an airline employee young Gitika Sharma had named him responsible for her
rape, torture, harassment and suicide.
Ms. Mukherjee wrote that on August 12, 2012 the then Delhi Pradesh BJP President Shri
Vijender Gupta led the protest to arrest Gopal Kanda at India Gate, along with prominent leaders
of BJP such as, Shri Satish Upadhyay, Shri Ramesh Bidhuri, Shri Pravesh Verma and Ms Vani
Tripathi. Today, a power hungry BJP is pushing aside all qualms to form an alliance with the
same Gopal Kanda, whose arrest they had so forcefully demanded. The then Delhi BJP President
was quoted by the media saying “till Gopal Kanda was arrested and sent to jail BJP will not take
wink of sleep”. Clearly, the greed to usurp power in Haryana at any cost has overtaken any
semblance of morality.
Ms. Mukherjee also wrote that it may also be noted that the then BJP Mahila Morcha President,
Smt. Smriti Irani, and now the Union Minister of Women & Child Development Minister had
also protested on the streets of Haryana demanding arrest of Gopal Kanda. But Ms. Irani is silent
today. On the other hand, today, BJP Vice President, Ms Uma Bharti has requested the party
leadership to follow the path of morality and reconsider taking support of tainted Gopal Kanda.
The BJP propagates 'Beti Bachao, Beti Padhao' but practices 'Beti Satao'! The belatedly
released NCRB Data 2017 exposes BJP's tall claims of providing women safety, especially in
Delhi. In metros, Delhi retains its ignominious reputation having highest number of cases of
Crime Against Women, with 11542 cases. The reported Rapes in Delhi are 1229 out of total
1322 cases reported across UTs. This is a sordid commentary of how the BJP has failed provide
security to women in Delhi, despite the Central Government led by PM Shri Narendra Modi,
being in-charge of law and order in Delhi.
Given the above facts, if the BJP still wants to align with rape and abetment to murder accused
Gopal Kanda, then people will not be silent. We have seen the repercussions in the recently
concluded elections in two states. 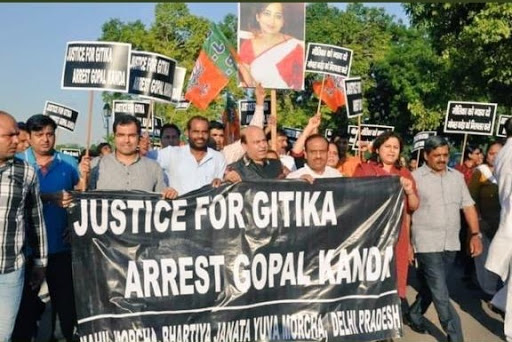