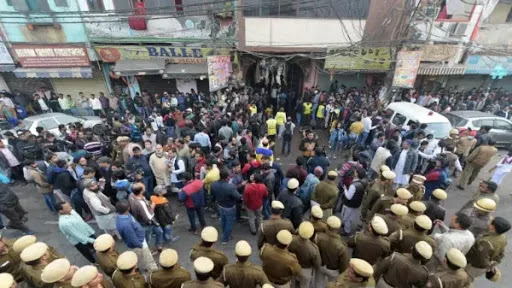 This fire tragedy is no way less than the one in 1997, 'Uphaar Agni Kaand' where 59 lives were burnt to death and over 100 were injured. It is kind of a sense of  deja vu, here  where more than 43 labourers were charred to death in a factory in a residential area when a massive fire broke out at Delhi's 'Anaaj Mandi' at Rani Jhansi Road, in the wee hours of Sunday.
More than two dozens of fire tenders, soon after the call about the blaze travelled across,  were pressed into operation to douse the flames. It took them hours to battle the leaping flames down. Those with burns  were rushed to LNJP (Lok Nayak Jai Prakash hospital), RML (Ram Manohar Lohia Hospital), Hindu Rao and Laody Hardinge  with serious burns, and are reported to have been  fighting for life.  The fireman Rajesh Shukla played a heroic role by saving 11 lives and that too without waiting for any back-up to arrive  as they were sleeping at the time when deadly blaze engulfed the building.
The fire due to short circuit broke out on a six-storey building where the labourers worked and lived as reported. 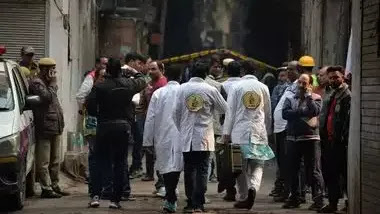 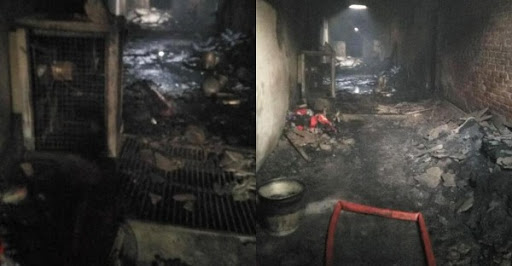 The police have arrested the owner of the building. As per the offficials, the factory had no fire clearance. The Chief Minister Delhi,NCT Arvind Kejriwal announced 10 lakhs to the kins of those who lost their lives in the blaze and 1 lakh to the ones sustained injuries in this fire tragedy.