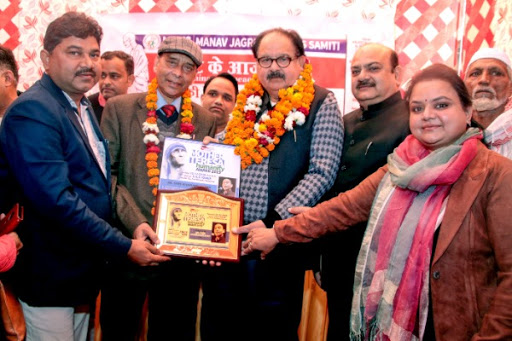 Dr. Syed Aijazuddin Shah s/o Late Shri S.N. Shah was born on 09-August 1953 in Meerut (U.P). His respected father was a government contractor and a freedom fighter. Dr Shah known as “POPULAR MEERUTHI”. He is a famous Hindi and Urdu poet. Well known humourist and satirist and has been performing Mushaira and Kavi Sammelan since last 45 years all over the world. He targets burning topics of the society.Sometimes he composed subjective poetry and he is also an expert in composing “Tazmeen” which is an impressive term in Urdu poetry. He has travelled across the globe for Mushairas and Kavi Sammelans. At his  early age, passed M.A, PhD (Urdu) examination and began his career in teaching Urdu literature, in Meerut college and became popular during college time. After few times he left the profession and started performing mushairas. He is a simple person with grounded nature. He has performed 10,000 Mushairas and Kavi Sammelan around the world. Has literary visited such as USA, Australia, Saudi Arabia, Pakistan, Singapore, Nepal and all over India. He performed on all India radio, radio Zindagi, Toranto radio station,  Dubai, Doha, Qatar, Pakistan, Sydney and Saudi Arabia etc. TV performances are also performing through out the world TV station. Most of the awards and honours have been awarded to him.