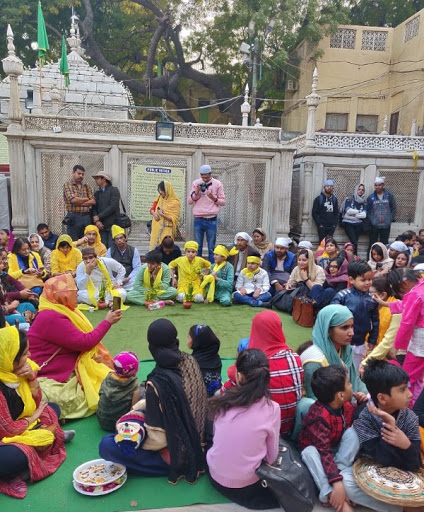 Sakal bun phool rahi sarson
Umbva phutay, tesu phulay,
koyal boley daar daar, Aur gori karat singaar,
malaniyan gadhwa le aayin karson
Sakal bun phool rahi sarson
The fest of Spring that bids adieu to winter fell on 29 January this year with everyone appearing coloured in mustard yellow. The 12th century old Sufi shrine of Hazrat Nizamuddin is a place abuzz with festive and exotic activities on the occasion every year.
The atmosphere so live here became all the more electrifying with devotees from different faiths and walks congregating and celebrating the day beyond pride and prejudice.
The scenario otherwise is more polluted by politically religious hatred poisoned in the air despite all this suffocation, everything gets diluted amidst the sublime poetry sung in the form of qawwali at the mausoleum of Hazrat Nizamuddin. The  mystic compositions wrapped in couplets and verses penned in the 12th century era by the legendary poet  Amir Khusrau in Awadhi, Braj, Persian and Khari boli resonate the holy precinct.
Basant is celebrated with religious fervour not only by the Hindus but also by the Muslims in various parts across India.  Chishti Sufis may have begun the celebration of Basant amongst Indian Muslims dated back to the 12th century.
The Hindustani Raag Bahar based qawwali  is recited even inside the tombs of the saint on this day unlike others. This celebration begins late in the afternoon around 4 and goes on till 7 in the evening. Aaj basant mana le suhagan aaj basant mana le. The visitors join the scouting musical group which goes through the by-lanes of the settlement, halting briefly at the grave of Khwaja Tajuddin Nuh, the saint’s nephew, before they finally go to the dargah. Inside the dargah, the singers take out yellow sheets that they carry holding above their heads. On the day, some qawwals  from the dargah in Basanti headgears  go to a nearby Haryana village to collect mustard flowers. On the way back, they offer the flowers first onto the tombs of many saints related to Nizamuddin Aulia's  lineage,  including Naseeruddin Chirag-e-Delhi and others near Mehrauli. 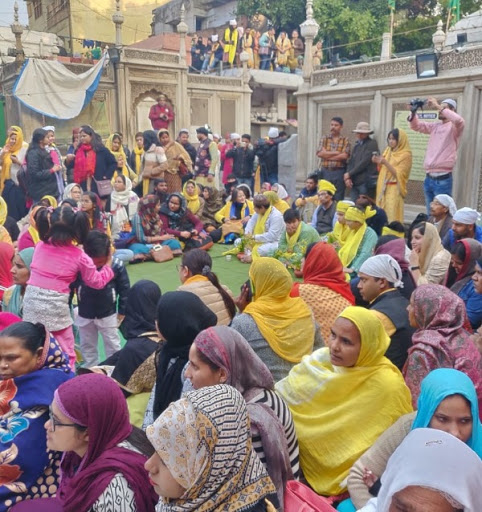 The dargah of Khwaja Hazrat Nizamuddin Auliya is situated in the capital's Nizamuddin West, opposite another landmark Humayun’s Tomb, which is in Nizamuddin East.
There is an event which marks the history about celebrating Basant at the dargah. The story goes back to the time of Hazrat Nizamuddin Auliya, who lived from 1238 to 1325, after whom the dargah was named. Nizamuddin Auliya was a saint of the Chishtiya silsila, one of the four prominent Sufi orders in India. Khwaja Moinuddin Chishti, whose dargah is in Ajmer, Rajasthan, founded it in India. Khwaja Qutbuddin Bakhtiyar Kaki, popularly called Qutub Sahab, whose dargah is in the vicinity of south Delhi's Mehrauli succeeded him. Baba Farid, whose shrine is in Pakpattan in Pakistan, succeeded Kaki, and Baba Farid was succeeded by Hazrat Nizamuddin. The dargah remains abuzz with pilgrims, devotees and backpackers. Thursday appears an event.
Altamash Nizami, a descendant of the sufi saint Nizamuddin Auliya tells  a tale about the origin of Basant celebrations there. "Hazrat Nizamuddin did not have children but was deeply attached to his sister’s son, Khwaja Taqiuddin Nuh. He fell ill and passed away; this sorrow brutally shattered him. The grieving saint went into his shell for months. He stayed for days in a closed room, spoke too little and sat crying rivers beside the grave of Nuh.  The noted legendary poet and the saint's disciple  Amir Khusrau, was moved seeing his master in the stream of grief. He would always find a way out to comfort him with a cheer. Khusrau  tried ways to restore the lost smile of his peer, he with other disciples began to sing Persian couplets praising the blossom of  spring, and symbolically the mustard flowers were offered to the grave of Nuh. This is how the tradition started and has become  an annual event at the Khanqah-e- Nizamuddin Aulia, and subsequently  at other centers of the Chishti order across the country."
Furthermore, the saint's withdrawal troubled Amir Khusrau and other followers. One day, Khusrau saw a group of village women dressed in yellow, carrying mustard flowers and singing on the road near the Khwaja’s chilla-khanqah, a retreat where he had spent his life reaching out to people, which is located adjacent to gurudwara Dumduma Sahib behind the Humayun’s tomb. Khusrau asked the women where they were going dressed like this. They replied that they were going to the temple to offer flowers to their god. Khusrau then asked them whether this would make their god happy. When they said it would, Khusrau immediately dressed up in a yellow saree, and carried mustard flowers, went to the saint singing sakal ban phool rahi sarson, this broke the saint into a smile.
"The holy shrine of Hazrat has been organizing the festival of Basant Panchmi for more than 750 years with the same festive warmth and zeal. The devotees irrespective of Hindu, Muslim, Sikh, Isaai pay tribute to the saint's tomb. In fact, there is no religious discrimination. Many programmes are organized. Basant offering through singing is wholly dedicated to the Hazrat Auliya. (Khawaja Nizamuddin  Auliya)."
Syed Afsar Ali Nizami, Chief In-Charge of the Dargah spoke.

The Sufis dervish have a long tradition of adapting to the local culture and language of the places they visited to spread their message. The Chishti Sufis too, have not only tried to relate to the Indian culture and music, they enriched the various cultural forms as well. Basant is a living example of that; in today's scenario, while communities are being forced into polarization, The instances like Muslims' celebrating Basant and Hindus' taking part in Eid celebration are seen only in India. The entry of the female folks into the sanctum is prohibited. 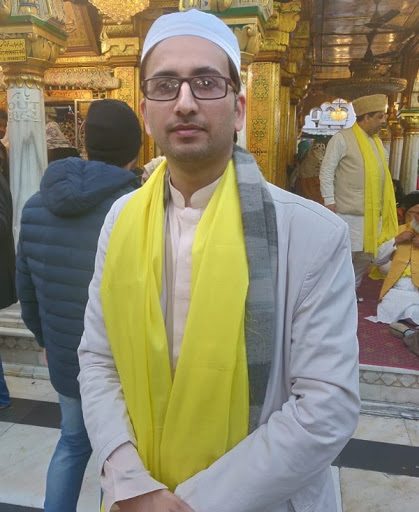