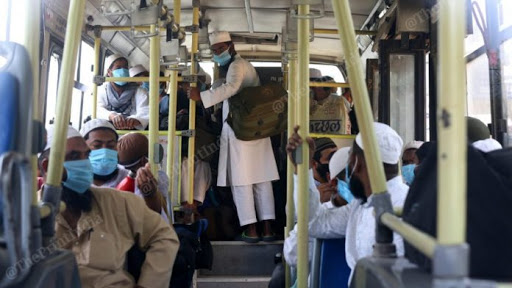 DELHI: The police find themselves in the dock with such a grave gaffe. The question hits hard is that what the police had been doing, the police station almost shares the adjacent wall with the Markaz; why it failed to notice such a massive congregation of 2000 plus people at the Markaz.
It has been holding gatherings for long  by adhering to  the norms and guidelines marked by authorities  for them. However, those jamaati, who remained stranded couldn't travel to their respective destinations following the blanket lockdown. They were held up there.

The 36 hour long operation at Markaz Nizamuddin ended at 4 this morning. The  headquarters of Jammat -e-Tablighi was evacuated by the police. The whole building has been sealed after pulling as many as 2361 people out of the building. The entire area has been sanitized by numerous teams of MCD working tirelessly. The police are keeping a drone watch on the surrounding areas.
Besides, 617 were admitted with a complaint of cough and cold to different hospitals whereas the rest were kept under quarantine.
Crime Branch of Delhi Police is investigating the case. According to sources, Maulana Saad 56 years, chief of Tablighi jamat does not use mobile phone. He is believed to own two houses; one is at Nizamuddin and the other at Zakir Nagar. The police are not able to make headway of his whereabouts. A source says, he has isolated himself. However, the fact remains is that where he could have  disappeared. Maulana Saad, from over 214 countries across the world, has more than 100 crore followers including kings and heavy weight politicos.
Maulana Saad, Dr Zeeshan, Mufti Shahzad, Mohammad Ashraf, Mursaleen Saifi, Yunus and Mohammad Salman are
the  names figured in the FIR filed by Nizamuddin Police.
It is reported that 90 people are tested positive for COVID-19.
The jamat (congregation) had attendees from different countries and states. 10 are reported to have died of the deadly virus who had been a part of the gathering at Markaz.
Mukhtar Abbas Naqvi, Minister of Minority Affairs, condemned the incident and said that 'it's a planned conspiracy,there must be some political or religious party involved in this.'