UTTRAKHAND: Humanity not far from the madding crowd 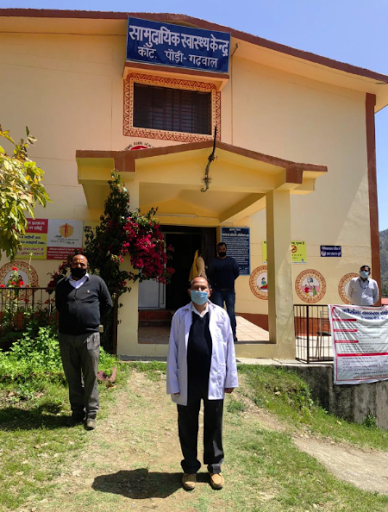 Humanity is still alive in the land far away from the dinny and cosmopolitan towns.
The whole country has been placed on lockdown for about four weeks.  Venturing out of homes or traveling outside Delhi amidst tight security at every checkpoint full of challenges and dangers lurking around.
How the story within a story is unfolded by an entrepreneur who travels from Delhi to her native town in Uttrakhand. Suddenly, she gets a call from her village in Paudi, in the Garwal range, Uttrakhand. It reads that her ailing grandmother who lives in a small  hamlet, was taken seriously ill.
Madhuri with her mother and maternal uncle set out for the destination a long way, appears to be even farther in these trying times. This uphill task involved many unnamed dangers staring hard in the face.  After completing paperwork and seeking permission from the DCP of the district concerned, they set off.
The family comprising three drove off to the destined place; they on the way had to confront with dozens of barricaded borders manned by the state police. A plethora of genuine explanations were made but failed to convince the cops on duty. They produced the  documents validating the authoritative mark but to no avail. Friends in high places rescued their movements a little.
The five hour long journey reached the final halt in 24 hours, plus. They were flagged down by the police personnel many a time, finally the administration marked them to a hospital where they were thoroughly examined. They had to put up there till the following dawn.
Here, the Balodi family  interacted with humanity; somewhat still alive in medical fraternity if not in the capital city, Delhi, save for the doctors now who have been the frontline warriors in the face of coronacrisis. Otherwise, all everything is as clear as a bell.
This angel comes out, donned a clinical white coat, was a telling example of a real human being. Doctor Tomar from Kot, a small village in the mountains was on a special duty attending to patients if diagnosed with Corona virus. "Around 1am, when we got to this hospital as instructed by the administration, Dr Tomar examined all the three of us. We were strictly warned not to enter the village without getting examined for the deadly disease. Hardly had we stepped inside the hospital, when we heard Dr Tomar saying;
‘ye log kaafi door se aye honge. Pata nahi khana khaya bhi hoga ki nahi’."
The doctor went straight into the makeshift kitchen and prepared noodles and tea  for them, treated as guests. He even apologized to them saying that 'Abhi bus itna hi tha. Kal aapko achhai se nashta karwayege’.
The trio not aware of the doctor in a government hospital being so hospitable received this warmth beyond their wild imagination. And very natural it was when you are from Delhi where the doctors mercilessly flay you, rob you of your long time saving and consume the last penny of the  medi-claim under various heads ranging from rare (irrelevant) investigations to doctor visits to ICU to ventilator kind of thing et al.
The family rather accustomed to the inhuman treatment of  medicos in Delhi, could not  believe this gesture of hospitality generously showed by Dr Tomar.
"We had all day long been running on an empty stomach, and were literally starving. He gave  us food at the hour when it was most needed. We all ate up hurriedly and thanked the gentleman. The following morning had us breakfast on potatoe-stuffed parantha and tea."
The journey resumed for the  remaining part to be travelled for hours on end. The preliminary examination was done before the final adieu. "A  fresh team of the officials arrived to take us to the main hospital in Paudi. Dr Tomar came out and wished us goodbye: we left the place with sweet memories of a brief stay there and the words Dr Tomar spoke- ‘ fir ana aap log jab sab theek ho jayega’ still chime in my ears. We exchanged our final greetings  and promised him that we would come next time pretty  soon and  for sure."
The world infested with satans and blood sucking vampires has somewhere in its fold hides the  angels like this medical practioner. The family
finally reached the long awaited destination the next day.
"During the whole course of travelling when the country was  blanketed under  lockdown, we  met so many new faces some helped and some denied bluntly. I cannot ever overlook the real and much- needed help and polite stance of  Dr Tomar. I am delighted at the end of the day when I finally met my nani who is 82 and had been waiting for our coming since we started from Delhi. The role of  police and administration is immensely commendable; they are adequately equipped to take any challenge head-on They are working 24x7 with utmost dedication to the state and the nation as a whole.