All mysteries lie buried with don slain in 'custody death' 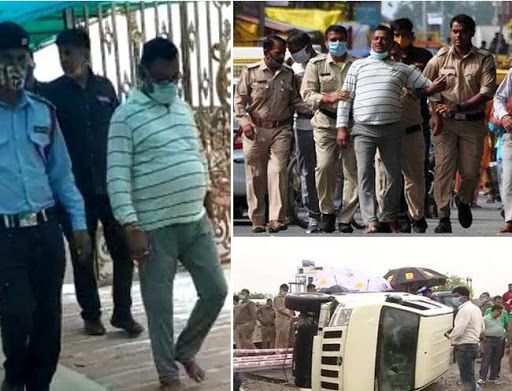 The police announced a bounty of rupees 5 lac for any clue leading to the arrest of Vikas Dubey son of Ramkumar Dubey of Bikru under PS Chaubepur. He had gone into hiding ever since July 3 after  8 policemen lost their lives (martyred) in a shootout.
Why do the UP police seem to be in a tearing hurry killing Vikas Dubey, synonymous with terror in eastern Uttar Pradesh? Why on earth does the state choose police encounters over judicial system?
Are the police in UP so fragile that a gangster in custody walks away comfortably after  snatching the cop's gun, difficult to digest.
Prabhat snatched the gun from the police, tried to flee but shot dead so was the case with Vikas who in a police story snatched a gun from the stoutly built cops and ran off about 3 kms with a limp in one his legs with all cops chasing him all along after the SUV Mahindra he was carrying in turned turtle on the slippery road due to brief drizzles. The  chasing cops with sophisticated firearms gunned him down.  Bullets him in the waist and chest (from behind) he would and could have been shot in the legs only if the police had wanted even in the least to travel him safe to Kanpur. He deserved a trail and capital punishment without a doubt.
There are many vital questions screaming for a satisfactory answer.
Vikas Dubey architected a vast empire undoubtedly with the connivance of the khadi and khaki clad.
Dubey with his assault rifle AK 47 is believed to  have shot dead 8 policemen in cold blood on July 3 under the jurisdiction of Chaubepur, Kanpur. Barbaric and utterly condemnable act for he deserved nothing short of death penalty.
Who all tipped off Vikas is a big question. In charge (daroga) Vinay Tiwari suspended  with immediate effect, was believed to be in don's contact whereas on the other side Dubey  had some old score to settle with DSP Devendra Kumar Mishra who had been posing a threat to the don as a source. Another police officer KK Sharma was to go with the raiding team but he was on leave the very day, obviously colluded with the don.
Vikas Dubey on the run for almost a week with cops panting after him, first must have been cajoled into surrendering himself to the police and killed thereafter, a fixed format to eliminate a gangster cultivated by and for the government if his tenure fixed by the government itself is over.
After he had staged surrender in the BJP ruled state (Madhya Pradesh) believing that anything but encounter was the least expected once the show entered the public domain. He even shouted his name at Mahkaal temple, Ujjain so as to make it public, an eyewitness.
The more  frustrated than embarrassed UP Police still licking their wounds, woke up to the call with a smile and swung into action. The STF UP (Special Task Force) wraps up and rushes to Madhya Pradesh with all detailed  instructions by the bosses in Lucknow: where and how to execute him? How could the hovering media be barricaded way before the site chosen etcetera?
The fuming STF reached Ujjain and whisked the surrendered don off to Kanpur even without transit remand as both the states heads had already spoken to each other on the phone.
Why were the locals stopped from coming into Bhonti where the so called encounter was staged?
Why was he not kept fettered and handcuffed, he was a hardened criminal as the police state that,and of course he was, who on a dare murdered a political leader in front of a posse of policemen.
Would NHRC consider the procedure of this encounter and take to task the team tasked with ferrying Dubey to Kanpur?

Don at a glance:

Vikas Dubey in his 50s entered the world of crime with a murder case and over a span of 30 years he had had more than 60 cases of murder, attempt to murder, kidnapping, extortion, rioting and threatening against him. He  Killed Santosh Shukla, state minister in 2001, surrendered and acquitted. Contested and won Nagar Panchayat elections while in jail.