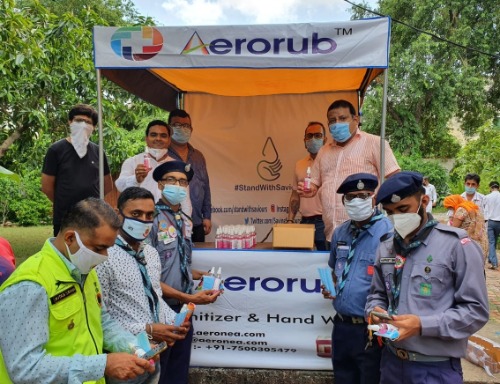 A programme 'Atal Ji's Dream- A self Sufficient India- A dialogue' was held at Vivekanand Aashram in East Delhi's Khureji  where the stage was shared by many noted speakers. The programme was held to honour the  police officials of the area who have been playing an active role as forefront warriors in battle against COVID19.
Ashish Kandpal, the owner of the company, Aeronea Biochem, said, "We are launching our sanitizer brand Aerorub and would be distributing it free of charge to an organisation, Stand with Saviours." He further emphasised that through this noble initiative, he intended to extend social service when everyone was facing immense hardships.
Aerona Biochem aims to work in collaboration with the Stand with Saviours for serving army, police personnel and most importantly, the doctors who are worst affected by the ongoing pandemic. A massive campaign is also being organised to associate more and more people with this social initiative to make it popular among the masses.
Stand with Saviours is the result of  collective efforts made by enthusiastic young boys who have been known to Mr Kandpal for a long time. IMWA president Rajiv Nishana was also present at event. Acharya Vikramaditya lauded the efforts made by Aerorub, in his address Acharya boosted the morale of those who participated in the noble cause. Top brass officials from Delhi Police fraternity as frontline fighters were present whose presence added lustre to the occasion.