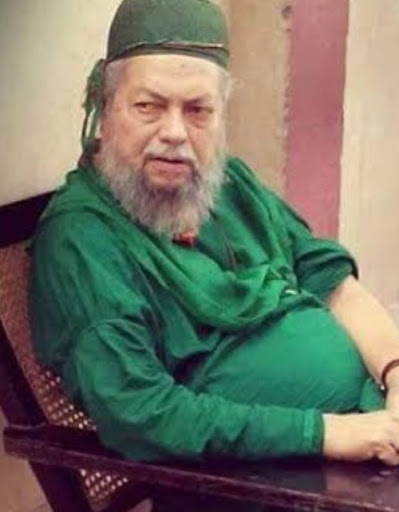 An unending sea of followers emerged to bid tearful farewell to Peer Shah Hasni Mian Niyazi popularly known as Sarkar among his devotees who departed from this temporary sojourn bidding adieu at the age of 70. He had been ailing for quite sometime.
No sooner did the news of his passing away (visaal) flash by than the sea of emotions raged, people began to throng around the Khanqai Niyazia, Bareilly Sharif from all sides.
There was nothing but colossal commotion of cries, silent-loud sobs,some whispering and choked prayers and the struggle to take a brief glimpse of Sarkar being brought to the resting place among his great predecessors.
The saint of the sufi order from Khanqai Niyazia sajjada nasheen Hazrat Shah Mohammad Hasnain famed as Hasni Mian departed from the world leaving millions of followers both abroad and back home distraught; shell- shocked to react, couldn't believe something really unbelievable. Many of his overseas devotees kept calling late frantically ever since the sad news travelled.
Hasni Mian's  health took a serious turn on the night of Tuesday when he complained of uneasiness and discomfort, he was rushed to a nearby private hospital where he breathed his last at 1: 27 am. Soon after his last came, his followers millions in number started pouring in to the place where he had dwelt. He was laid to rest on the evening of Wednesday; after namaaz-e-maghrib amidst the mountains of inconsolable and overwhelming grief and uncontrollable tears.
All roads from the town of Bareilly and other states led to the Khanqai Niyazia, where all irrespective of age, size,caste,creed,religion and gender gathered to pay their last respects to the departed Peer. Thousands of them were close to hysteria, a kind of trance blanketing the scene was beyond measure.
Hazrat Hasni Mian, the fifth long generation of the sufi leanage of Niyaz-be-Niyaz Hazrat Shah Niyaz Ahmad Qibla succeeded in 1980 and created Niyazia, a centre of peace and harmony transcending the shackles of religions, a place where the confluence of  Ganga-Jamuni has flowed free to nurture the culture and tradition of India being as one secular entity.
The most important aspect of the courtyard of Niyazia was that many big names in the circuit of Indian classical music gharana and Hindustani gayaki have been an integral part of it for decades. Besides, several celebrities are the disciples of Sarkar Hasni Mian.
Now on, Sajjada Shah Mehndi Mian, the eldest son of Sarkar Hasni Mian and the most worthy will have the privilege to lead the silsila, the order further.