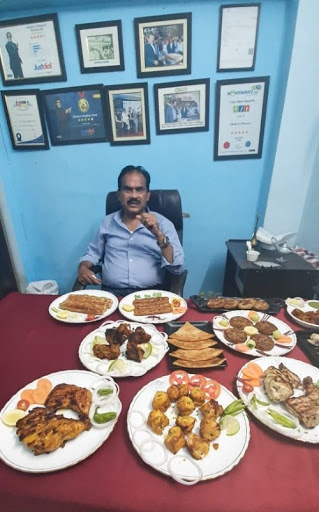 Mughlai food preparation influenced by Turko-Persian cuisines of Central Asia comprises dishes developed in the medieval Indo-Persian cultural centers of the Mughal reigned eras. Walled city aka purani dilli flashes across one's mentally drawn itinerary when spoken of mughlai food.  Karim, Al Jawahar,  Haji Shabrati Nahari, Qureshi kababs, Taufiq's Dil Pasand Biryani and Nazeer Foods top the unending list of eating joints. Either side of the lane is decked with  delicacies elaborately spread right from Urdu Bazaar to Matia Mahal to Chitli Qabar; every corner is replete with a meaty menu.
Alkauser's  Awadhi Foods
It has a long journey with many intriguing nuggets of how it traversed all the way preparing exotic and authentic mughlai food for the country's who is who lot. This tall list was comprised of food lovers hailing from fashion industry, the then Bombay film industry, white clad politicos and giant entrepreneurs; all came to relish the food cooked by Ishtiyaq Ahmed whose father, a great cook in Lucknow, is believed to have invented the recipe of kakori kebabs. This diner with many feathers in its cap has bagged numerous awards for its luscious and finger licking food. The takeaway began its long culinary voyage way back in the early 70s, one of a kind that actually fostered the culture of takeaway then. Al Kauser is popularly known for serving the most exquisite and palatable starters like mutton burra, chicken tikka and succulent and melt-in-your-mouth kebabs. Alkauser, food connoisseurs know for its Alkakori and galouti kebabs.   The main course dishes out mutton qorma, mutton nahari, mutton stew, chicken and mutton dum biryani served in an earthen pot, haandi is what Al Kauser has fashioned. If you want to avoid the congested lanes and labyrinths cheek-by-jowl in the walled city you have another option beckoning to you at Chankyapuri kiosk near Assam House where Alkauser welcomes the foodie folks with a hearty platter.
Since 1990, Ashfaq Ahmed has kept alive the lineage of his father;  a master chef having worked with ITC Maurya for many years, where the crème de la crème visited for silky smooth kakori and galouti kebabs prepared with as many as 52 blended condiments and spices.
Later,Ahmed moved to the diplomatic surroundings of Chankyapuri,  set up a kiosk selling kakori, mutton steaks, chicken tikka quilted with rings of onions and creamy chutney, wrapped in a papery roomali roti. Alkauser has six outlets across the city and one in Gurugram. " We have a dining with good seating capacity in R K Puram. We have been in outdoor catering for 300 to 400 people that cost rupees 1500 per head that includes five different starters followed by a main course." Ashfaq gushed. Besides, numerous leading national dailies' eating guides certify the kebabs of Al-Kakori as Delhi's best in the Stand-Alone Category.
"We have a facility of home delivery within the radius of three kilometers in half an hour without any extra charge. We have Swiggy and Zomato our partners. We are specialized in outdoor catering for corporate sectors and enterprises. We have done for British Council. " Naresh Shukla General Manager spoke.
The renowned columnist and food critic Sadia Dehlvi and her mother the humble Zeenat Kauser Dehlvi had frequent gatherings at their residence on 11 Sardar Patel Marg during the time of Shama magazine was quite popular that brought together many bureaucrats, sportspersons, politicians and journalists to meet over lavish food prepared by Ishtiyaq Ahmed. The name came from Zeenat  Kauser, Sadia Dehlvi's mother who brought Ishtiyaq to Kautliya Marg. Firoz Khan, Rajesh Khanna,Sanjay Dutt, JayaBhaduri, Shatrughan Sinha, Shahnaz Hussain, Kirti Azad, Sanjay Dutt many more visited to enjoy the platter.

Delhi Cloth Mill owners Charat Ram and Bharat Ram, Prime Minister Indira Gandhi, Nawab Mansoor Ali Khan Pataudi and Nargis Dutt were among those who relished the food most done by Ahmed.
"This is our fourth generation with 25 trained cooks working under one roof as we have a centralized kitchen so that we can maintain the taste and quality we are known for. Our veg biryani is as delicious as chicken." Ahmed concluded saying.
Those regular Delhiites at Alkauser said that the food is fresh and rich in flavour. Meat is not chewy or leathery. The daylong starving lot drops in and gets the parcel back home. They all come from other corners of the city to dig into the grilled grub incredibly famous.
You can hit the outlet everyday save for Tuesday between 7 and 10 in the evening. The place remains abuzz with cars parked in front of it where people eat from the disposable cardboard plates and bowls right there or carry the stuff back home to share with others.  Alkauser's crispy kathi rolls stuffed with tikkas are just amazing one can fall in love with.
Don't quit the joint without trying firni which you may relish with special warqi parantha, the USP at the eatery.